skip to main | skip to sidebar

How come you you ain't gone here to git your Christmas presents, daggumit!?

http://www.doublenaughtrecords.com/rapidcart/index.html
Posted by TA at 5:40 PM No comments:

On the Delbert cruise, I was about a foot away from being overboard, a hundred foot drop into the Pacific, and the wind was howlin'! Good times!
http://www.youtube.com/watch?v=MRJxQDxcuHs&feature=youtube_gdata_player
Posted by TA at 11:19 AM No comments:

Did an interview with my friend Tom Compton from Chicago, check it out!
http://ia700709.us.archive.org/29/items/DrivewayDrinkerInterviewsTerryAnderson/TerryAndersonSmoothInterview.mp3
Posted by TA at 6:42 PM No comments:

" Wait a minute!... you mean we got a gig TONIGHT?" I'm always the last to know. We were just an hour or so away from Columbus when I came to this realization. We'd been on the road for a good six hours and I had no clue when or where the gigs were. So, from now on when you hear me say "I'm just the drummer!" you’ll know I’m not kidding! Just tell me when and where to be and I'll turn it on... and that’s what everybody in the OakTeam did. We killed it every night of our trip to Ohio this past weekend. I think at every gig, Thurs.-Sunday afternoon, I heard somebody say "This is the best band this place has ever had in here!" And of course, that’s why we do it. But not just that, we are honestly having more fun than anybody in the place. We love playing with each other and the songs and just trying to make each other laugh at every turn, even during the 2 slow songs we do.
Our new best friend friend, Erica Blinn was on board. She flew down Wednesday night to play with us at Deep South, the bar, in Raleigh. We did her new record every night, 6 songs plus she and Dave sang "Purple GTO" together. She and I hopped in the "Scooby doo" seat in the back of Jack's Expedition Thursday morning about 10am. 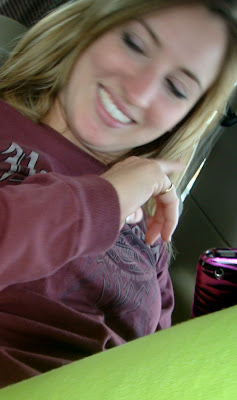 eeeeeewwwwboy! This might have been a mistake! It was a bunch'a fun hangin' back there with her though. She is so cool. I'm sure we'll be writing together soon for her next record.
When we got to the Crown Sports Bar thingy in Columbus I realized that they weren't shittin' me, we really DID have a gig! Meeting us at the load-in door was Jerry Blinn, Erica’s dad. 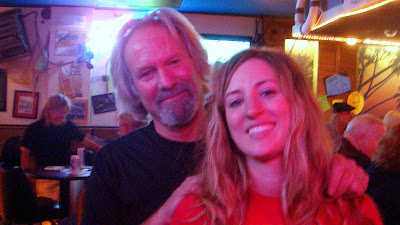 He promoted a couple of these shows and ran sound. He had to come in at 10 in the morning to set up the PA and get everything ready for us. He and Carolyn waited on us hand and foot. The folks at the club were really nice too. They brought out HUGE salads and took our order for the cold pizza we had after the show. We had to get on stage before it was ready. And you know what happens when we get started? Well, let’s just say its kind'a like a train coming down a big hill. You just cant stop it! We did about 50 locomotive minutes and then brought Erica out. She kept the energy up and maybe even kicked it up a notch! It was "highly entertaining" (in the words of some old coot!). We carried on for another hour or so and loaded the trailer in the windy cold. 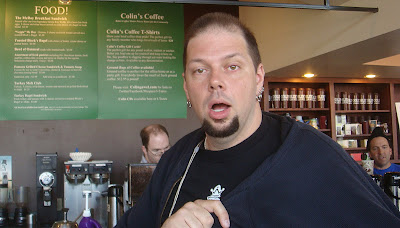 We had to get to the radio station and be on by 2pm, but our first favorite thing to do when going to Columbus, is to eat grilled cheese sandwiches and tomato soup at Colin's Coffee. It was awesome as always, then we stopped by the liquor store (no! not “on the way to revival”!!!), and then headed down the road to the radio station. The radio show was silly, but fun. We pumped up the Sat. show, the big CD release party at The Rhumba Café by playing 3 songs live in the studio. All week, I was continuously telling folks that we had TWO new records out, ours and hers...actually released the same day! 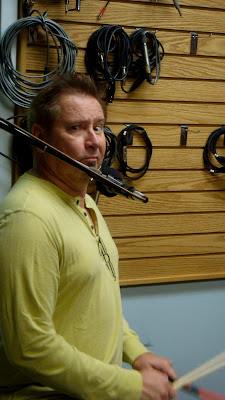 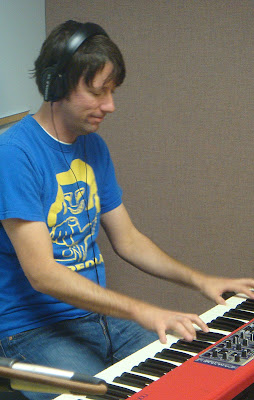 Friday night was another "this is our first LOUD band" gig. WTF!? These two clubs hadn’t tried the loud Rock yet and this place, King Ave. 5, was especially set up fer it! BIG room, BIG stage! It was a great Rock venue that had yet to find the right bands. We seemed to fit the bill, and made the most of our time there. We LOVE big stages! WE can run around (even me!...on drums!), chase each other, and act as stupid as we really are, all while rockin' some great tunes. Greg's keyboard caught fire early, literally! Smoke poured out of his Nord about 3 songs in and made him step out of the batter's box for a moment! The trainers came in and checked everything out and found that only 8 keys had been lost. He did the rest of the weekend sans those 8, but I couldn't tell. He's good like that. We were REALLY REALLY good that night. I sang my usual 50+ songs and only missed one LETTER! I sang the right word, but put a "G" at the beginning of it. eeeeeeeewwwwwwwboy! …but I was still pretty proud of myself!
Saturday was the day we could actually catch our breath, soundcheck wasn’t until 6. WE lazily fell out of our beds and went out for a proper breakfast at about 1pm...and you know, what could be a better breakfast than INDIAN BUFFETT?! Chutney’s or whatever it was called was kicking our asses! It was all great. We got back to the room just before 3 and we all had a sleepy feeling come over us. We ALL passed out for at least an hour. Greg and I (better known as Ivory and Tubs, for obvious fuckin' reasons) were thinking ahead and brought our bathing suits. The pool at the Crown Plaza is the BOMB! Its design is straight out of the late 60's, plus hot tub! Greg and I hung out with a nice wine (given to me by cutie uber fan, Miss Linda) and a "Liquor Latte" in the water for about an hour before heading to soundcheck, which was INTERESTING but we got through it and had a great Greek meal @ LaVash on High St. before heading back to the room to get ready. The club was full of Erica fan's AND OAKTeam fans when we got there just after 10pm. The opener finally figgered out how the bass rig worked and came on around that time. The drums stayed in the back and Erica rocked they asses until about 11:45. We learned "Stop Draggin' my Heart Around" in soundcheck and pulled that little nugget outta our hat. She had a great show and we followed with one of our better shows of the year, if not THE best show of the year! I swear, we sounded at least as good as the record, if not better that night. I would proudly put the whole show up on YouTube if I had it. Those shows are the ones we live for. It’s like golfers playing for that one great shot of the day. Perfection is fun!
Got to bed after 4am, so 10am found me moving slowly...if not hardly! We creeped into Rock mode and got out of the hotel by 12:30pm and headed to Delaware,Ohio. Who'd ever heard of such a place? But we got there and damn it! It was a REAL place! We missed out on eating at Bun's (the pride of Delaware) when our starving asses walked by a fairly new Mexican restaurant in town. They made guac right there at the table that kicked quite a bit of ass. 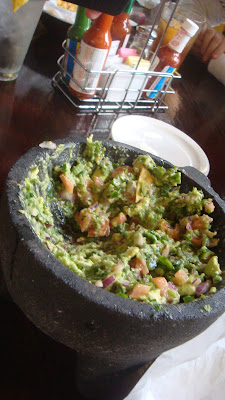 Again, we had to shorten our meal and get on stage. We boxed up the rest and threw it in the truck for later. We got back to Roop Bros. and blowed the hell outta them folks' minds! They never seen nuthin' like us, boy! NUTHIN'! We played my hits to give'm a primer and then put it into 2nd gear with a few songs from the last record "Goin' or Comin'" into "Willie Mayes" which set up songs from the new, highly acclaimed record, "More Smooth Jazz and Sweet Sweet Jams". Erica came up and made the folks dance even more for about 45 minutes and then we took a short break. We came back and did about 8 more songs and genuinely thanked the folks for coming and said goodnight. They stomped and screamed and moaned and laughed and hollered and yelled and swung their fists in the air, kicked things, got on the floor and breakdanced, stood on their heads, did the Chuck walk, the "diggin' taters dance" from THE BEVERLY HILLBILLIES, ballet splits, touchdown celebrations and finally we'd had enough...we got back up there and did a special "Punished" (which has NEVER been the same...EVER!) followed by "Thunderbird". They loved it, and we loved them. We loaded up and hugged all of our friends goodbye and hit the road, headed for our Holiday Inn in Charleston. 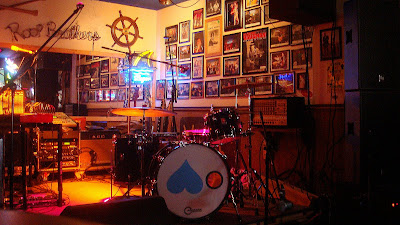 Wow! See how fast 4 days goes by! Before I knew it we were in Burlington, NC listening to Erica on the radio via iPhones. 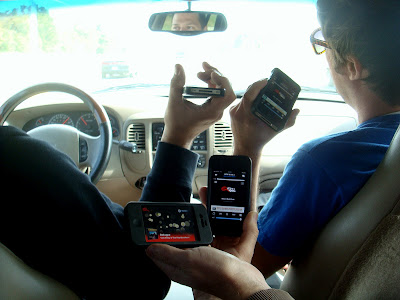 I felt like the lifespan of a fly had just gone by me...but what a glorious life!
Posted by TA at 10:38 AM 1 comment:

School Kids Records Raleigh has copies of the CD and Vinyl...NOW! If you buy a copy at the store you can get into Deep South Bar for free! So get on down to the store and then we'll see you at the club. All you have to do is show the door person your store receipt. Admission is good for any one of the three Wednesday nights left in the month of OAKTober.
Posted by TA at 9:16 PM 1 comment: 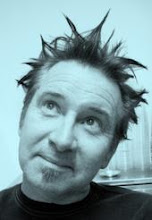